(In order of appearance)

Lusen Mendel, they, is a freelance audio journalist and entertainment podcaster. They are one of the contributors to Out in the Bay, San Francisco (KALW), and assist teaching Girls on the Mic middle school classes with Women's Audio Mission. Lusen's personal work focuses on local issues, and the history and impact of non-binary identity and language.

Jason Wodicka is a queer technical nerd who cares about people. He’s currently engaging in those interests by being a staff software engineer, by collecting a widely-scattered assortment of interesting acquaintances, and here, with the people of Foolscap!

Heather L. Barnes, MA: Heather has over 15 years of experience at the director level working in museums and aquariums. She worked as a Director at the John G. Shedd Aquarium and the Museum of Science and Industry in Chicago, IL. Throughout Heather’s career she has applied improvisational techniques to teach science, to create world class participatory and engaging guest experiences, and to build team relationships and shift organizational cultures. A large portion of Heather’s practice involves working with STEM professionals to enhance science communication skills.
Heather founded Improv at Work, LLC in 2014 and has grown the business to reach new audiences in academia and within the legal profession. In addition to serving several universities and national professional organizations, Heather chairs a committee with the International Association of Amusement Parks and Attractions.
Previous projects Heather has worked on include collaborating with Argonne National Laboratory, The American Society of Cytopathology, the College of American Pathologists, and she leads workshops in multiple departments at Northwestern University and the University of Chicago to name a few. In
2022 Heather joined the faculty at Northwestern University where she teaches Presentation Skills to MBA students at Kellogg.
Heather is also a faculty member of the Second City Chicago Training Center. She has a Master’s degree from the University of Chicago.

David Gürçay-Morris is a designer and artist working across a range of mediums to design human interactions through visual, spatial, and kinetic storytelling. Over the last 25 years he has designed more than 150 plays, operas, and museum exhibitions in the United States and Europe, and taught design and experimental theater at Williams College in Massachusetts.
As a theater artist he made scenographic environments and original performance work. Frequent collaborators included Young Jean Lee, Taylor Mac, Target Margin Theater, Kristin Marting, Clubbed Thumb, and Les Freres Corbusier. He has received a Princess Grace Fellowship, a Hewes Design Award nomination, and had his designs included in the Prague Quadrennial.
His exhibition designs orchestrate every aspect of the presentation and revelation of objects, their associated information, and the overall flow of visitors through the gallery space to tell a story about the displayed artwork. Recent work with museums includes Repro Japan: Technologies of Popular Visual Culture at the Williams College Museum of Art, and Advisory Board member for the nascent Seattle Universal Math Museum.
As a kid in the 1980s David read his first fantasy and science fiction novels, ran his first D&D campaign, and played his first computer RPG—and hasn’t stopped since! He currently lives in Seattle with his spouse, four dogs, and two cats, where he designs, writes, and codes experimental video games exploring player choice, autonomy, and performativity in participatory narratives.

Kathi Jennings has been pickling since the early 80’s, first learning at her homesteader grandmother’s knee. She married a hardcore gardener and has been preserving his harvests out of both fascination and necessity. Her favorite pickles are lacto-fermented celery, which is usually on hand to add to her egg- and tuna salad sandwiches. Her family’s favorite pickles are short-brined dill cucumbers, which she is required by law to make every summer.

Kai Wodicka likes exploring possibilities and diving into metaphorical deep ends, and his kitchen is currently host to a couple dozen jars with various ferments in different stages of the process. His list of things he’d still like to try is even longer!

Wing Mui is a professional artist working in Redmond, WA. Her queer-and-nerd-friendly small business Sevenish Magpies specializes in pins, jewelry, and accessories. She is also an accomplished embroiderer and fiber artist whose work has won awards at the Evergreen State Fair.

When Carrie Emmerich isn't busy painting miniatures or other board gaming accessories, she's custom-building, reassembling, or plaster-casting more. Though "technically" just a hobbyist, her works have twice now commanded bids of thousands of dollars at the annual Desert Bus for Hope online charity telethon.

Greg Bear is the author of THE UNFINISHED LAND (Houghton Mifflin Harcourt 2021), KILLING TITAN (Orbit 2015), HULL ZERO THREE (Orbit 2010), CITY AT THE END OF TIME (Del Rey 2009), MARIPOSA (Perseus paperback November 2010), HALO: CRYPTUM, HALO: PRIMORDIUM, and HALO: SILENTIUM (Tor, 2011, 2012, and 2013). He's the father of two daughters, Chloe and Alexandra, and is married to Astrid Anderson Bear, who has written for SAN DIEGO NOIR.
Greg Bear has written more than thirty novels and five story collections, earning him five Nebulas, two Hugos, two Endeavours, and the Galaxy Award (China). He is one of the original founders of San Diego Comic-Con.

Gregory Benford is a professor of physics at the University of California, Irvine, where he has been a faculty member since 1971. Benford conducts research in plasma turbulence theory and experiment, and in astrophysics. He has published well over a hundred papers in fields of physics from condensed matter, particle physics, plasmas and mathematical physics, and several in biological conservation.
He is a Woodrow Wilson Fellow and a Visiting Fellow at Cambridge University, and has served as an advisor to the Department of Energy, NASA and the White House Council on Space Policy. In 1995 he received the Lord Foundation Award for contributions to science and the public comprehension of it. Benford is the author of over twenty novels, including Jupiter Project, Artifact, Against Infinity, Eater, and Timescape. A two-time winner of the Nebula Award, Benford has also won the John W. Campbell Award, the Australian Ditmar Award, the 1995 Lord Foundation Award for achievement in the sciences, and the 1990 United Nations Medal in Literature.

David Brin is a scientist, tech speaker/consultant, and author. His novels about our survival and opportunities in the near future are EARTH and Existence. A film by Kevin Costner was based on The Postman. His 16 novels, including NY Times Bestsellers and Hugo Award winners, have been translated into more than twenty languages. Earth, foreshadowed global warming, cyberwarfare and the world wide web. An advisor to NASA's Innovative & Advanced Concepts program, David appears frequently on shows such as Nova and The Universe and Life After People, speaking about science and future trends. His first non-fiction book -- The Transparent Society: Will Technology Make Us Choose Between Freedom and Privacy? -- won the Freedom of Speech Award of the American Library Association. His second nonfiction book is VIVID TOMORROWS: Science Fiction and Hollywood (2021).

Steve Jackson is a board game legend. He has designed and produced games since the mid 1970s, mostly through his company, Steve Jackson Games, which he founded in 1980. His most famous works include the tactical wargames Ogre and Car Wars, the GURPS role-playing system, and fnord the casual card game Munchkin. Jackson's games have won more than a dozen Origins awards.

Madison Scott-Clary is a transgender writer, editor, and software engineer. She focuses on furry fiction and non-fiction, using that as a framework for interrogating the concept of self and exploring across genres. A graduate of the Regional Anthropomorphic Writers Workshop in 2021, hosted by Kyell Gold and Dayna Smith, she is studying creative writing at Cornell College in Mount Vernon, IA. She lives in the Pacific Northwest with her cat and dog, as well as her husband, who is also a dog.

Another January has come, and that means February and March can’t be far behind. As we kick off 2023, we wanted to share a bit of information about what Foolscap has been doing, and what our plans are. Is there going to be 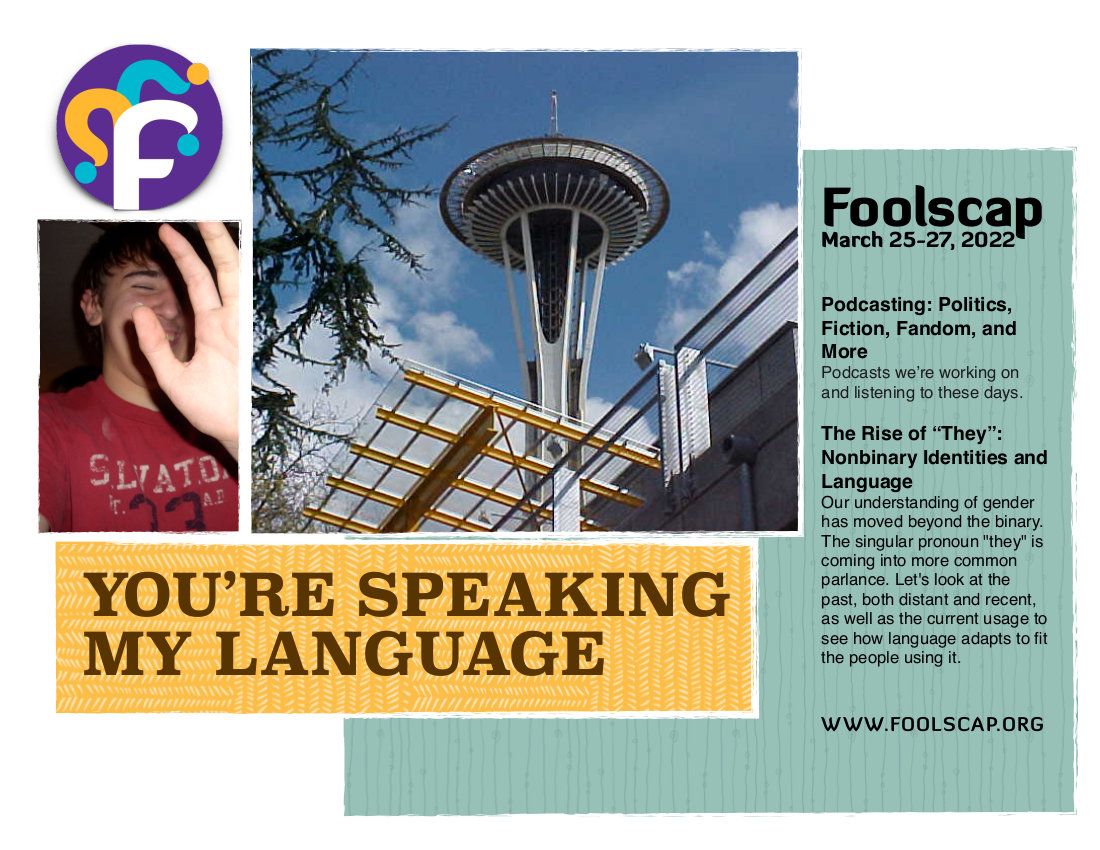 Podcast and language panels at Foolscap 2022.